The Development of Photography - A Different Perspective

It seems that recently, many photographers who consider themselves serious enough, are having a hard time dealing with the fact that anyone can take photos these days, and call himself a photographer. And if that's not enough, they can get much more Likes. For some time I've been pondering about this issue myself. While an amateur, in the sense that photography is not my main source of income, I'd still like to consider myself a serious photographer. And it seems that in order to get Likes, you don't have to invest half as much an effort as I did on some of my images... Recently, my friend Lev, writer of the Double Exposure photography blog, has written an article dealing with a different aspect of that issue, that made me think some more. 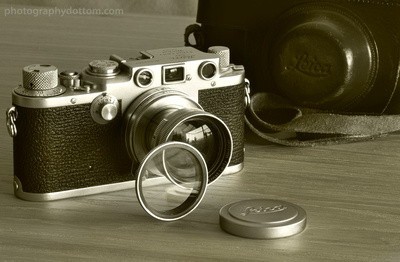 Looking back on the 150 years of photography, there was a time when the place of professional and serious photographers was clear. Only professionals had the intuition, or knew how to calculate the correct exposure, not to mention the knowledge required in order to properly develop the photos yourself. Ansel Adams described taking one of his most recognizable images in his book The Making of 40 Photographs:

"I almost ditched the car and rushed to set up my 8×10 camera. I was yelling to my companions to bring me things from the car as I struggled to change components on my Cooke Triple-Convertible lens. I had a clear visualization of the image I wanted, but when the Wratten No. 15 (G) filter and the film holder were in place, I could not find my Weston exposure meter!... ...I was at a loss with the subject luminance values, and I confess I was thinking about bracketing several exposures, when I suddenly realized that I knew the luminance of the moon – 250 c/ft2. Using the Exposure Formula, I placed this luminance on Zone VII; 60 c/ft2 therefore fell on Zone V, and the exposure with the filter factor o 3x was about 1 second at f/32 with ASA 64 film. I had no idea what the value of the foreground was, but I hoped it barely fell within the exposure scale. Not wanting to take chances, I indicated a water-bath development for the negative.".

That's what it took to be a real photographer in those times (this image was taken in 1941). With time, however, the necessity of dealing with chemicals, and self-developing the photos had diminished. Photographers still had to know how to expose correctly, but it was much easier to develop the images later. With the spread of light meters, it also became easier to expose. The invention and improvement of film made cameras smaller and more accessible to the crowds. Putting 100 years of photography in perspective, serious photographers in the early days of photography could not have dreamt to compete with the quality achieved by amateurs with much smaller, lighter and easier to operate film cameras.

What film couldn't do, the digital age did: now everybody has a camera. In their phones, at the very least. The distinction between serious photography and "taking pictures" - a term that did not exist less than a 100 years ago, became blurry. Easy as it is to take, process and publish images, it seems that the only thing that separates "good photography" from "bad photography" is composing the image. And while everybody has the chance of proving their creativity, more and more good photographers emerge, and the lesser the chance for an individual to stand out.

But then again - that's the story of photography. With every advancement - it became much easier and much more accessible. The phone-camera is no more revolutionary than Kodak's first consumer film cameras, or than the first camera with built-in light meter. The main difference is that while it became much easier to take photos over the years, it wasn't easy enough for the majority of the population, and that's what the digital and smartphone revolution have changed.

In my opinion, the real question when trying to understand where we stand in light of this revolution is "Why people photograph?". This is not a new question - it was discussed a long time ago by many, including Robert Adams in his book carrying the same title. While most people photograph for recording their everyday life events, and no less important - for fun, I think that serious photographers have a different motivation. For serious photographers, it's more an issue of the perfection of the image. Of how good timing, composition and exposure all come together to create one, good photograph.

The style of photography might change, and there may be more "medium level" photographers out there, but the value of good photography will remain.

Israeli Landscape Photography by Tom Shapira
Thanks Mark. I like your analogy to music.

I think it's really a matter of different perspectives, there's probably no right or wrong (now at least...). Personally, I don't share the view that the crowds should have a critical influence on art. People always liked what they liked, before they could "like" it on Facebook etc. Art has many levels. The more trivial art is direct, and doesn't have a great depth (I think that many scenic landscape photographs belong here, as well as some landscape paintings, etc). The top level, in my view, contains "cryptic messages" that only viewers with a proper education / understanding might appreciate. For instance, some painters used recurring symbols in their works in order to convey a message in an indirect manner. I feel that if the "common people" are to have critical influence on art, then art - or at least the high level of it - would simply cease to exist.

One might say that photography is quite different than painting, or even from making films, since the commons *can* practice photography without a proper knowledge of it as an art (or at least as technical knowledge). It's probably true. But taking wedding photographers as an example - I think there will always be enough people who will appreciate good wedding photos instead of "social network photos" which they'll probably get from people with phones and cameras in their wedding. Their motivation might be the desire to have nicer memories, or even because rich people will still be able to afford real photographers, and the middle-class people wouldn't want to be considered "inferior".

Regarding music - it's a great analogy. But here too I think we share different perspectives. From my point of view, the nineties and early 2Ks had indeed awarded us with some terrible pop music. Everyone who had enough money or looked good enough got famous. While this is not completely untrue today, I think in recent years many people got tired of it. "Trash" music remains, and is still used in clubs etc., but I think that more musicians today look back to other types of music, creating different music than 10 years ago. Same goes for reality shows. So in my view music (and musicians) have experienced a transition stage in the last years. I think photography will (or is?) experience a similar transition.
Mark(non-registered)
Nice post. I agree with what Lev wrote but i want to elaborate. The ability by the masses to 'create art' isn't unique to the Photography. It's the same with literature (and has been for a longer period), music, painting and any other form art you can think of.
Except for the reasons you mentioned (ease and accessibility) it also has to do with the emergence of hobbies and free time - or to be more precise, you now have the economic ability to sustain yourself with your day job and still have enough free time and money to do something else with your life.

Now i think that what makes a picture good is whether or not other like it. For it to be artful or in good taste it has to be liked by certain people. For it to be popular is has to be liked by a lot of people. A lot of people think that art is in decline but i think it's just that more people get to vote on what they like. Used to be only aristocrats who were educated in the arts decided what was good - they has the money and the supported the artists that they liked. sometime later the critic was king and nowdays the masses are king. That;s why studios have larger marketing divisions than they do creative ones.

So like Lev said - appreciation for good photography won't spread because all people like what they like and only some people like what you like. Same goes for pop music, reality television, 50 shades of pornography and everything else.
Israeli Landscape Photography by Tom Shapira
First - thanks!
Expression... well that one slipped by. What kind of a serious photographer am I now..?!
Regarding 2, I really hope you're wrong... Because if you're right, the term "photography" will become similar to calling a kindergarten drawing "a painting". I guess we'll have to wait and see...
Lev(non-registered)
Enjoyed reading it, and seeing a different angle on the subject.
Two thoughts that came up while reading:
1 . I think one more thing that in many cases sets "Serious" photographers apart (except perfection of the image that you spoke of) is trying to convey a message and/or expressing oneself through photography.
2. I don't think understanding and appreciation of good photography will spread too much. There will always be people that will like tacky things.
No comments posted.
Loading...
Subscribe
RSS
Recent Posts
The River of Fog in the Mountains of Jerusalem - Finally!! Sleeklens Worflow for Lightroom - A Short Review Back online... Sunrise Over the Ramon Crater, and some Photo Stacking advice Sand Dunes Photography - an Article in Landscape Photography Magazine Getting a Sharper Image: Depth-of-Field and Lens Diffraction in Landscape Photography A Taste of Africa - Recommendation for Short Trips near Maputo and Gaborone Almond Blossom in Israel Antelope Canyon - Story and Tips Lightroom - Opening NEF files in an External Editor
Keywords
Photography Israel Landscape Peru Sunset Sunrise Nature Cordillera Blanca ישראל Images
Archive
January February March April May June July August September October November December
All photos and contents © Tom Shapira
User Agreement
Cancel
Continue