Getting a Sharper Image: Depth-of-Field and Lens Diffraction in Landscape Photography 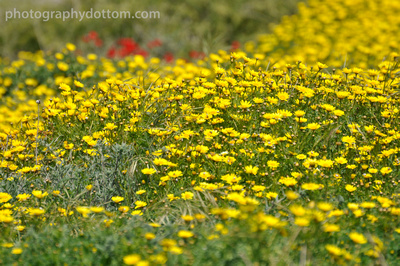 A shallow DOF is not very common in Landscape Photography, but it does have its uses. For instance, when photographing a field of flowers, a shallow DOF can be used in order to put more emphasis on color than on form, or in order to create some layering of the flowers. The same is true when trying to isolate an object from its background. Usually, the only challenges that arise when using shallow DOF are:

1. The quality of the lens. This affects the bokeh (the shape of the background blur), and the maximum aperture opening that can be used.

2. Controlling the DOF and focus-point, so that exactly the area you'd like will be sharp.

However, in most landscape photographs, the photographer usually tries to achieve sharp details throughout the entire frame. This means using larger f-number (i.e. f/11, f/16 etc), yielding larger depth-of-field. As a side-effect (probably an undesired one...), it also means that landscape photographers must live with the burden of carrying tripods, due to the longer exposure times required when using smaller apertures... 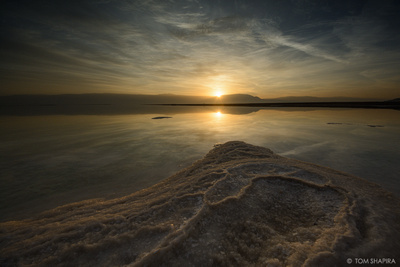 Morning Walk, Dead SeaThe sun rises above the Dead Sea. Two figures can be seen on the embankment, enjoying their morning walk.
Even though it's not high-season, winter sunrises in the Dead Sea can be magical!

This, however, presents an entirely different trade-off - one that is less familiar: using small apertures means higher diffraction - and might also mean higher blur. This means that using too-large apertures will result in a shallow DOF, causing areas far from the focused area to be blurry. But using too-small apertures will cause diffraction to be more apparent, resulting in blur over the entire image..!

So what exactly is this "diffraction" thing? Well, it's a term from optics, which usually means it requires a long, complicated explanation... But bottom line, for the photographer, it means that no single part of the image will be sharp. It's important to clarify that the blur caused by diffraction has nothing to do with depth-of-field. It's a different type of problem, that is more apparent when using smaller apertures (larger f-numbers).

How small is too-small? Well, it depends on the lens, as well as on the sensor (or film) size, quality and resolution. For instance, good quality sensors with higher resolutions have the ability to distinguish the smallest details. But this also means that even the smallest blur will be visible, when looking at the image enlarged to 100% (or similarly, on a large print).

An example will probably put everything to order. For this demonstration, I used Nikon's D7100 which is a 24 Megapixels crop-factor DSLR, with a Nikkor 35mm f/1.8 lens. The camera was set to take JPEGs with Fine quality, with the default Standard (SD) settings (sharpening, contrast etc). The following photo shows the complete image, marking the areas that will be enlarged later. The green area is the focused area, and the red areas will be used to check the DOF and diffraction. 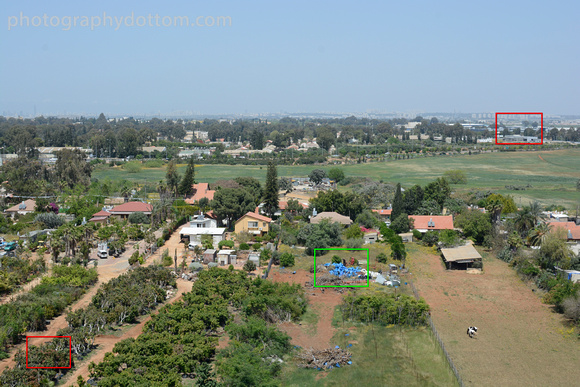 Rural Landscape, 35mm with f/8This is the full image. The green area, slightly off-center, is the focused area. The red areas are used to check the trade-off between DOF and diffraction.

As mentioned, the green area is the focused area. This means that looking at it alone, we should be able to see when diffraction starts to be more visible, without involving the effect of DOF too much. The following series of images shows the green area, with different aperture settings. The actual size of the images will depend on your screen, but regardless, you can see that f/4, f/5.6 and f/8 seem to have optimal sharpness, while f/11 starts to show slight blurriness. The blur caused by diffraction finally becomes very noticeable around f/16 and on.

Comparison of Sharpness with Different F-StopsThis series of images shows the difference in sharpness when using different apertures. Diffraction starts to be noticeable around f/11, and becomes obvious around f/16.

This clearly shows that f/22 on this lens is, to put it gently, not very usable. Using sharpening may improve the situation, but not by much, as shown in the following comparison (click on the image to enlarge):

Finally, it's interesting to see the trade-off between the effects of DOF and diffraction, when checking the further and closer areas. The following series of images shows the red areas over different aperture values.

The further area (top right on the original image) seems more affected by the aperture, so let's use it to compare the effects of DOF and diffraction. It seems that optimal sharpness is achieved somewhere around f/8 or f/11. This comparison also clearly shows, that not only using a smaller aperture won't improve the sharpness - it will degrade it! With f/16 and on, the effect of diffraction softening the image, becomes even more apparent than the increase of sharpness due to the increased DOF.

It's interesting to compare the two effects:

Comparing the images above, it seems that using f/22 to increase the DOF, actually result in a blur very similar to that of f/2! So what can we do about it?

Well, the first step is recognizing the fact, that with a crop-factor DSLR, using an aperture value of more than f/11 or f/13 is probably useless if your intention is increasing DOF. This is especially true for normal lenses. For lenses with a higher focal length, the effect of DOF is more apparent, thus using apertures smaller than f/11 or f/13 might still result in some improvement of the overall image sharpness.

A more effective solution is to use focus-bracketing. This means taking a photo several times, using different focusing distances, then combining them in post-processing, taking the sharpest part of each image. This requires some effort, and is particularly difficult with most zoom lenses, since focus distance actually affects the focal length. This results in slightly different image for each focusing distance - making it harder to combine these images.

Personally I think that some blur is acceptable, as long as the main subject or main area of interest in the shot is sharp (this kind of attitude also makes life easier...). I usually use focus bracketing only when sharpness is required with a very close foreground, such as when taking photos of the crest of a dune. But finally, making the compromise is up to you. 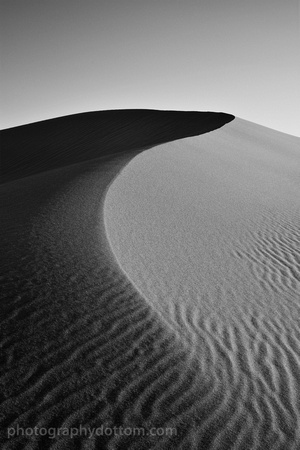